Carman-Ainsworth swim gets edged out by Fenton 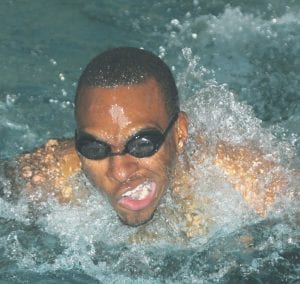 Carman-Ainsworth’s Jarron McCallister takes a breath during the butterfly event.

FLINT — After starting the current season on Dec. 3 by placing sixth with a score of 243 at the 15-team Tiger Relays, which was won by Ann Arbor Skyline with 385 points, the Carman-Ainsworth varsity boys’ swim team has been hitting on all cylinders.

While the Cavaliers were hoping to ride this wave of momentum as long as they could, instead the team ran into Flint Metro League powerhouse Fenton on Tuesday, a matchup the squad was almost able to pull out before falling just short, 96-90.

Carman-Ainsworth had several secondplace finishers on the day, including freshman Evan Snyder in the 200 free in 2:06.15, Brian Mendoza was a runner up in the diving competition with a score of 160.70 and Blake McDonald was just behind the winner in the 100 back in 1:13.12.

“Sometimes in close meets like this one, the difference is which team gets more second and third-place finished, and tonight they got a little more than we did,” said coach Kevin McGlashen.

Having kicked off the current campaign in Genesee County against teams like Hartland, Howell and Haslett, the Cavaliers then moved on to host longtime Big Nine rival and current Flint Metro League member Swartz Creek on Dec. 6, which resulted in a 100-81 victory.

Carman-Ainsworth, 1-1 overall, 0-0 Big Nine, is off for the rest of 2011 and begins the New Year hosting Lapeer West on Jan. 5 before traveling to the Saginaw Heritage Relays on Jan. 7 and starting league play at home against Davison on Jan. 12.