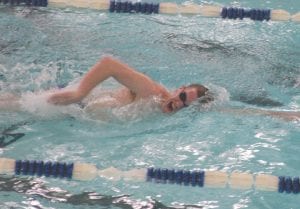 Carman-Ainsworth’s Anthony Summers competes during a relay race at a recent varsity swim and dive meet.

DAVISON — The size of the Carman- Ainsworth/Flushing varsity boys’ swim roster has been a plus all season long, powering it past smaller teams like the combined squad from Lapeer West and Lapeer East, while propelling it to the top of the standings at several relay races. The Cavaliers’ Big Nine opener at Davison last Thursday was no exception to that rule, either, creating a small gap that only got wider as the night when on as the Cavaliers outlasted the Cardinals on their way to a 96-77 victory.

At the 20th Annual Hawk Relays at Saginaw Heritage on Jan. 7, Carman- Ainsworth was up against a tough 10-team field, yet still was able to finish tied for third with DeWitt for the day with 244 points. With Lake Orion winning the event with a score of 324 and Heritage finishing second at 280, placing fifth for the tournament was Powers with 196, Corunna had 174 and Davison was seventh with 162. That just left Ogemaw Heights, Oscoda and Arthur Hill to round out the bottom three spots with marks of 132, 94 and 26, respectively.

After Chris Michael placed third in the diving competition with 235.5 points for the Cavaliers, it was Casey McNally, Evan Snyder and Jake Ziaya who finished fourth in the 800 free relay in 9:05.74, Deiondre Smith, Bryon Mendoza, Vinh Dang and Michael were second in the 200 medley relay in 2:13.66 and in the fourth event of the tourney Tyler Pangerl, Pat Sharp, Mike Johns and Austin Bower were fourth in 1:54.16. As for the 400 free relay, Tyler Arnold, Anthony Summers, Nick Price and Evan Snyder came in in 3:50.44 to take the fifth spot for the Cavaliers, Blake McDonald, Kent Crawley and Price completed the 3×100 IM relay in 3:30.89 to place fifth and in the 300 fly relay Summers, Anthony Zofchak, Ziaya and Mike Johns were third in 3:05.85.

Taking the sixth slot for Carman- Ainsworth in the 300 backstroke relay in 3:30.18 was Pangerl, Kiran Verariu, Snyder and McDonald, in the 300 breaststroke relay Price, Crawley, Jordan Michael and Pat Sharp slid in in 3:29.69 to finish fourth and Pangerl, Michael, Zofchak and Arnold came in fifth in the 400 medley relay in 4:40.23.

The Cavaliers compete at the Genesee County Meet today, tomorrow and Saturday in Fenton and host Powers for a Big Nine matchup on Thursday.