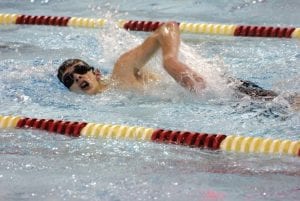 FLINT — The Carman-Ainsworth swimming program is in a state of flux. The Cavaliers have a very inexperienced squad with only four swimmers returning from last season.

The majority of the team is swimming competitively for the first time. The reason for the chaos is a split this season from Carman-Ainsworth’s former co-op with Flushing.

The Cavaliers, who didn’t have a girls’ team in the fall, is allowing the girls to swim with the boys this winter. But with only one girl out for the team, the number of swimmers remains relatively low.

“Our main goal is to grow our program so that we can stand alone and fill a meet lineup with both a girls and boys season,” assistant coach Abbey Cowen said. — K.W.