FLINT — The Carman-Ainsworth and Flushing co-op girls’ swim and dive team came into last Thursday’s Big Nine meet looking to cash in on the league’s final title, because next year all four teams will join the Saginaw Valley Association along with Independent Flint Northwestern. Instead, Carman-Ainsworth fought hard, but fell just short, scoring 324 points to finish second to Davison with 410. Powers was third with a score of 324.

Kicking things off for the Lady Cavaliers by placing second in the 200 medley relay at 2:13.59 was Rebecca Hrit, Ashleigh King, Makenzie Bartlett and Mara Johnson in, Allia Howard took top honors in the 200 free in 2:18.66 and Patricia Hrit was fourth at 2:27.78 and grabbing the fifth spot in the 200 IM by clocking in at 2:15.76 was King. In the 50 free it was Courtney Glinka that finished fourth in 29.04 for Carman-Ainsworth, Jenniffer Messina and Kassidy Lord were first and third in the diving competition with scores of 252.6 and 219.45, respectively, and Rebecca Hrit sild into the fifth slot in the 100 fly by with a time of 1:20.07. 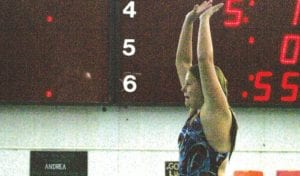 Kassidy Lord prepares for a dive.