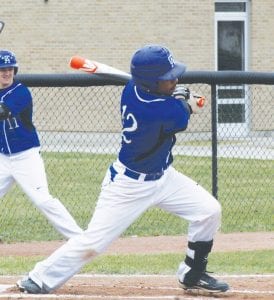 Jawonza Edwards takes a big cut at a pitch.

FLINT TWP. — In the race to the top of the Saginaw Valley League-South standings, the Carman-Ainsworth varsity baseball team hosted Lapeer for a doubleheader on April 16 and ended up getting swept 1-0 and 9-1.

In the opener, the story was the pitching duel between the Cavaliers’ Austin Jerome and the Lightning’s Logan Walker and Kevin Thompson, which included Jerome allowing five hits, four strikeouts and no walks to get pinned with the complete-game decision. Walker and Thompson, on the other hand, combined to give up four hits and two walks with 11 strikeouts in seven innings on the mound.

The second contest found Carman- Ainsworth struggling at the plate as Lapeer’s Aaron Labrie and Cody Birker came together to allow just one earned run on five hits in five innings of work. On the other side of this equation, the Cavs gave up eight hits and five walks. With these victories, Lapeer moved into first place in the SVL-South.

The Cavaliers Saginaw Valley League- South games at Flint Southwestern on Monday are being rescheduled because of weather.