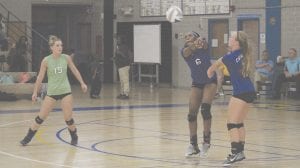 “It was nice to see everyone contribute in tonight’s (Tuesday’s) win,” said Carman-Ainsworth head coach Barb Hurand. “My setters did a nice job moving the ball around. We missed more serves than I would have liked to, but other than that we played pretty solid ball.”

The Cavaliers move to 2-0 in conference play and 3-6-2 overall. The season continues with a tournament at Clio Saturday.