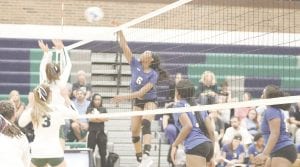 Carman-Ainsworth’s Diamond Lester spikes the ball at the net against Lapeer on Sept. 11. Photo by Kylee Richardson