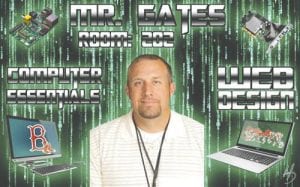 FLUSHING – Starting this fall Michael Gates will be taking over for Kevin Foltz as the new athletic director at Carman-Ainsworth. Foltz has taken the athletic director position at Flushing High, replacing Paul Brieger, who has moved on to Corunna as its operations principal.

Gates graduated from Flushing High School in 1998, went to Central Michigan University on a baseball scholarship, and he has been living in the Flint area for his adult life. Gates has been teaching at Carman-Ainsworth High School for the last 10 years and is thrilled about becoming the new athletic director.

“I always wanted to be an athletic director when I went into education,” said Gates. “A great opportunity presented itself, and I’m excited to be a part of a wonderful district.”

Gates thinks that Foltz did a “phenomenal job” and plans to continue with the forward thinking he had.

“Kevin was constantly looking for ways to improve the student-athlete experience along with improving facilities,” added Gates.