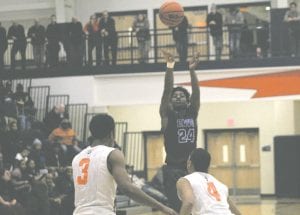 Ja’Kavien Lewis looks for a play to make against Powers Catholic. Lewis had 15 points in a win over Southwestern Tuesday.

FLINT – The Carman-Ainsworth boys’ basketball team jumped out to a 17-9 lead after one and went to defeat Southwestern 91-63 Tuesday.

The Cavaliers increased their lead to 45-23 at the break and led by outscoring the Knights 46-40 over the final two quarters.

Christopher Ballard had 19 for Southwestern.

The Cavalier beat Midland 70-42 Friday. Carman-Ainsworth led 16-6 after one.

The Cavaliers outscored Midland 14-11 in the second and held a 40-25 scoring edge over the final two quarters.