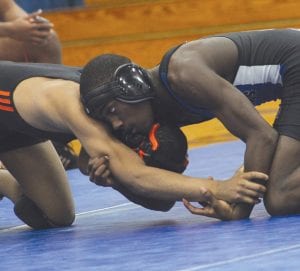 Malik Dawkins also went 4-1 at 112 and 119, including three pins. Tae Pendleton went 4-1 at 189, and Aaron Dupree had three wins at 125. Lorenzo Redmond started the day with a pin at 152, but was knocked out by a shoulder injury in his next match.

Weissend pinned and Thomas won by injury default against Davison. They were the only two Cavs to go 2-0 for the night. Against Flushing, Dupree earned a 2-0 decision at 119 and Cameron Brown came back from a 6-4 deficit to pin in 3:23 at 125. Redmond was up, 7-2, at 152 when his opponent was disqualified for flagrant misconduct. Pendleton pinned in 1:21 at 189.

It was the final home meet of their careers for seniors Cummings, Weissend and Cameron Martin. The Cavs traveled to Caro last night and will be in the Allen Park tournament Saturday.