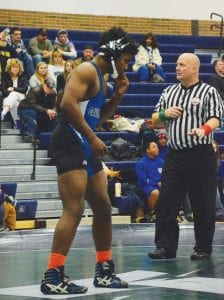 ALPENA – At individual regional No. 2-1 last Saturday, the Carman-Ainsworth varsity wrestling team took on area heavyweights like Davison and Lapeer on its way to qualifying six for regionals. Malik Dawkins was first at 160 pounds after slipping past Davison’s Brendan McRill 2-1 in overtime and Derrien Vaughn claimed second at 135 by falling to Davison’s Lincoln Olson by fall in 1:04.

“We wrestled in a very hard districts and I feel we did pretty good overall. We had four other wrestlers make it to the blood round only to get put out,” said coach Tom Weissend. “I had three wrestlers get put out by their teammates, two in the blood round.”

Finishing third for the Cavs were Jacob Yost at 103 with a victory by fall against Lapeer’s Kyle Dagleish in 1:19, Demetric Hall won by injury default over Bay City Central’s Tyler Vincent at 119 and Ronald Roland at 215 edged out Bay City Central’s Devonte Mysliwski 1-0. Carman- Ainsworth’s Grayden Hamilton also placed fourth at 285 by losing to Lapeer’s Justin Thomas in :16.

“Milik Dawkins is having a great year with only one loss and Demetric Hall only has four,” Weissend said. “Jacob Yost is wrestling very well as a ninth grader.”

Carman-Ainsworth competes on Saturday at the Saginaw Heritage individual regional.