Milik Dawkins has won 45 of his 46 matches for the Cavaliers this season.

Champions for Carman-Ainsworth included Milik Dawkins (45-1) at 160 after beating BCW’s Cole Rechsteiner by technical fall 18-3 and edging out Davison’s Brendon McRill 3-1. Demetric Hall (28-3) also earned a title at 119 by pinning Saginaw’s Jessie Sanchez in 1:09 and BCW’s Alex Simmons in 1:41 prior to beating Davison’s AJ Facundo 5-3. 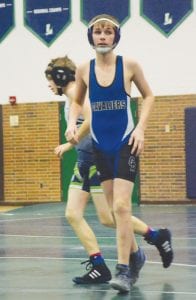 Jacob Yost and the rest of the Carman-Ainsworth wrestlers began the postseason yesterday.

As for yesterday’s team district No. 107-1 at Grand Blanc, the Cavs started out against the host Bobcats while Davison took on Swartz Creek. As for the ranked wrestlers in this draw, they include Grand Blanc’s Noah Gonser 125 and Cole Kemper at 140 and Carman-Ainsworth’s Derrien Vaughn at 135 and Milik Dawkins at 160..

Should they manage to dispatch the Bobcats, Carman-Ainsworth will then be in the unenviable position of trying to upend Davison despite the fact it’s the fifth ranked team in the state for Div. 1 according to www.michigangrappler.com.

The Cardinals have numerous individually ranked grapplers, as well, such as Max Johnson in third and AJ Facundo in sixth at 112, Deven Perez is fourth at 119 and Hunter Fifeld is eighth at 140. Lincoln Olson at 130 is probably Davison’s top threat, though, which explains why he’s ranked first for his weight class in the state.

One difference at this event will be all the individual talent from Lapeer, such as Dan Perry in second at 285, Jake Perry is second at 189, Pingel is first at 171, Kinne is eighth at 160 and Ellsworth is second at 145.