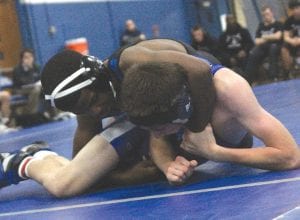 Carman-Ainsworth’s Malik Dawkins (on top) makes the jump to 152 lbs. this season.

FLINT — Head coach Tom Weissend is hoping senior TaQuan Pendleton’s star burns brightest during his final year with the Carman- Ainsworth varsity wrestling team. Now that Pendleton is ranked ninth in the state for Div. 1 at 189 lbs. according to michigangrappler.com, the Cavaliers seem poised to follow that example and make a run for the Saginaw Valley League-South title, a goal that looks that much more realistic now that the squad has shown exactly what it’s made of.

Over the weekend, Carman- Ainsworth competed at Owosso in a modified duals event that was run like a singles tournament, but scored under the team format, going 4-1 to finish fourth. Fueling this drive over and through the competition like a welloiled machine were a host of wrestlers such as Malik Dawkins, Jawanza Edwards and Darion Vaughn who went undefeated at 5-0 for the Cavs, but that didn’t make the contributions of athletes like Pendleton and Aaron Dupree who went 4-1 any less impressive.

“They’re wrestling strong. I’ve got a lot of experience this year. We had a few injuries, so I’ve got a couple rookies filling in and they did well,” said Weissend. “Some of my guys aren’t quite down to the weight they’re going to compete at this season, so to see them do well in the higher weight classes was nice.”

Last Wednesday, the Cavaliers began the season at Flint Southwestern for a quad meet and put the rest of the city teams on notice as to where they stand in the grand scope of things by destroying Flint Northern, 71-6, and Flint Powers, 77-0. Carman-Ainsworth only lost one match on the day, and even that contest featured a first-year wrestler who was filling in for an injured teammate, only to end up getting a tough draw against an experienced grappler who ended up earning the pin.