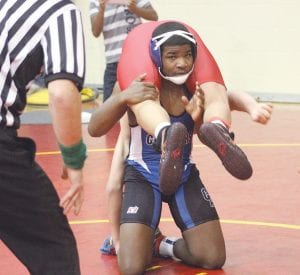 Malik Dawkins works from the bottom for Carman-Ainsworth.

MACOMB COUNTY — The varsity wrestling season tends to take teams to a myriad of different destinations by way of weekend tournaments. For Carman-Ainsworth, this meant traveling to the Warren Woods-Tower Invitational last Saturday for an individual event. The Cavs weren’t afraid to jump headfirst into this sea of unfamiliar faces, either, taking four individual championships on their way to a first-place team performance.

With Carman-Ainsworth making the leap from third to first during the finals, it was Madison Heights Lamphere that came in second for the tourney, Canton was third and host Warren Woods-Tower finished fourth.

Among the winners for the Cavs was Tae Pendleton at 189 lbs., Darrien Vaughn at 130 and Demetric Hall at 103. Heavyweight Jarron Thomas took a tournament title for Carman- Ainsworth, as well, marking his second straight after earning gold at the New Lothrop individual tournament on Jan. 5.

After starting the event seeded sixth at 119, Aaron Dupree also worked his way into a title bout against Canton, only to end up losing, 9-5, to finish second as an individual for the Cavs. Malik Dawkins was Carman- Ainsworth’s other second-place performer, but had to default his finals match because of an injury.

Jack Baker was Carman-Ainsworth’s only other wrestler to place for this event in sixth at 160.

The Cavs were at Saginaw yesterday for a meet that included Saginaw Heritage.