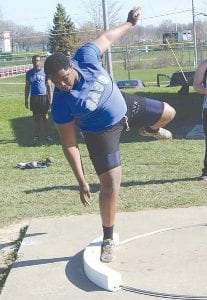 Carman-Ainsworth’s Myles Overton will be in the mix.

Because the Cavs only lost two players from last season’s squad to graduation, including starting outfielder/ pitcher Nick Hill, second-year head coach Tom Miller has a much better chance of finding success than he did in 2011 when Carman-Ainsworth ended up with a record of 4-25 overall.

“Unlike last year, which had very little varsity experience, we have 11 returning players. A lack of arms was the problem last year. We now have nine pitchers, six starters, so we can now deal better with a lot of games in a short period of time,” said Miller. “I expect great things this year. The only place I want to see us improve is on offense. We had a lot of strikeouts. (We) must be able to put the ball in play and cut down those strikeouts.”

Among those leading the comeback for the Cavaliers is a handful of seniors that include First Team All-Big Nine center fielder Chris Moran, pitcher/third baseman/ outfielder Colin Heaton, pitcher/short stop Jake Weissend and first baseman/pitcher Jeff Wilhelm. Also returning are juniors such as catcher/outfielder Brett Dorch, infielder/outfielder Justin Hubbard, pitcher/third baseman/catcher Jamaal Dixon, outfielder Grant Roe and second baseman/outfielder Brandon Bobcean, all of whom will have to help in the development of sophomores Brennan Gleason and Conner Storms at pitcher/first base and catcher/outfield, respectively.

“I expect us to do really well. We can compete for the last Big Nine title. We have a lot of talent. We just need to be able show we can win close games. Last year we competed, but gave up the big inning in each game,” Miller said. “That was sign of a young team. We should be better.”

Another element to this equation for Carman- Ainsworth is the talent it has that is new to the varsity, but could get a chance to contribute in 2012, including senior pitcher/second baseman Tim Rye, junior pitcher/ infielder Alex Thompson and junior pitcher/first baseman Ethan Lambits. — M.S.

Repeated calls and emails for pre-season information were not returned by press deadline.

Head coach Kara Kelly may have several bridges to gap as she settles in to her new position, but instead of focusing on what the Lady Cavaliers can’t control, she’s chosen to center her attention on the things that they can.

“We have many good returnees, one of which is our goalie, June Hall, who is a senior this year. Two returning players to look out for are Allia Howard and Kelsie Helton. Both of these girls are juniors and play midfield,” said Kelly. “Two of our new athletes that will get a chance to contribute to our team are Hope and Faith Woodruff. They are juniors and play midfield.”

Last season, Carman-Ainsworth started out by winning three of its first three contest, including victories over DeWitt, 16-6, Oxford Club, 20-6, and Gabriel Richard, 10-7, according to laxpower.com. It was all down hill from there, though, because the Lady Cavaliers lost their next nine games to end the year with a record of 3-9 overall.

“This season we hope to rebuild as a team. My girls are getting very good at communicating with each other and I believe that is one of the most important factors in being a successful team,” Kelly said. “Improvement can always be made, so I hope that we can continue to grow and eventually become a stronger team as a whole.” — M.S.

The Carman-Ainsworth girls’ squad should have no problem improving on its 6-9-2 record of last season, despite the key loss of Toni Jarnigan to graduation.

Sophomore Jordan Marsh will fill that void at sweeper and coach Jessyca Matthews noted her as a smart player that knows the game from all aspects. Senior Jasmine Jones at forward, already committed to play at Prairie View State and a three-time All-Big Nine honoree, starts the lineup of solid returning players. She’s joined by junior center-mid Shelby Marsh, new to the varsity, but off a strong Vardar travel team. Senior keeper Savannah Lacey, an All-Big Nine honorable mention and All-District First Teamer, will be a force to contend with again this season. Junior captain Monica Townsend, an outside midfielder who was All- District honorable mention last year, is what Matthews calls a really good player. Senior Amanda Richard will play a dual role at forward and midfield.

“This is the most gelled group I’ve had,” Matthews noted. “We discussed expectations in a chalk talk session and this group wants it all including the Big Nine championship, which will be the last one on the record as the league folds after the spring season. Junior Marah Johnson commented on that.”

Matthews says that although Johnson has struggled with injuries, she’s a key team motivator.

Newcomers to the squad include foreign exchange student and senior Gwi-Hye Han (say gee-hay hun) and freshman Melody Bamford, who will play at center mid. Matthews says she will get lots of playing time as the hardest worker on the squad.

“Gwi-Hye is a key member and shows why you should love the game. We would not be what we are without her spirit.”

“Soccer is a player-driven sport,” Matthews added. “You tell me what you want as goals and I will help you get there. The girls know that and are in charge of the season.” — L.P.

The Lady Cavaliers didn’t lose anything but their old dugouts last year. Virtually everyone is back on the squad to fill the spanking new dugouts and battle for the final Big Nine Conference championship, as that league disbands after the spring.

Keri Crane, who has changed her name from Keri Hart, is back for her fourth season as pitcher. She’ll have fellow senior Haley Snider behind the plate and lanky senior Kamrin Gold at first base. Another senior, Kelsey Ferguson, is at second base, and another, Tiara Gooch, is back for her second year at third base. Junior infielder/outfielder Jennie Klapko is in her third year on the varsity, and fellow junior Kinterra Tomlin is back in the infield. No. 2 pitcher Jessica McClung, shortstop/outfielder Katlyn Koegel and catcher/outfielder Meghan Borgerding all played as freshmen last year.

The players worked with a hitting coach in the offseason, and head coach Joe Willett has brought in Clio fastpitch legend Tom Doyle as pitching coach.

“The attitude is outstanding, and everybody’s excit- ed,” said Willett. “We seem to be a month or six weeks ahead of where we normally are this time of year.”

The Lady Cavs open the season April 13 at home against Lapeer East. — D.N.

The Lady Cavs return to the court after a season of five wins, six losses and two ties. Although they lost a few key components, Carman-Ainsworth will be bringing back a good core of last year’s squad.

“We lost my one and two singles players, but I do have about nine returning players, so that’s a good thing,” said coach Bob Chunn. Those include Katie Wilson, Rachel Sherwin, Yeon Jung Park, Taylor Kost, Hailey Hutchins, Alexis Burnette, Rachel Alexander and Michale Khan.

The Cavaliers are also looking to fill a few holes left over from last season.

“We’re currently in the process of doing competitive matches for positions, so we don’t have a lineup yet,” stated Chunn. Cionna Orr, Whitney Reynolds and Ashley King are just a few of the newcomers who are fighting for a spot on the roster.

“I think we’ll actually do better than we did last year,” continued Chunn. “Our record last year, if you look at it, we were close to .500. I think we’re going to do better this year. It all depends on who the competition is and who they’ve got to put out on the courts.” — B.P.

The Carman-Ainsworth boys’ track squad had a bit of an off year last season. The Cavs often have one of the top programs in the state, but last year’s 12-14 season fell far short of expectations.

“I think we’ve finished in the top 10 in the state 14 times,” said coach Kenn Domerese. “Last year, the killer was that we had some ineligible guys, so that knocked us out of the top ten. If guys work hard, and stay eligible, and stay injury free, we could be in the top ten.”

The Cavaliers certainly have the ability and talent to do just that. Myles Overton returns in the shot put, and threw 53- feet 1-1/4-inches at Saginaw Valley State last week. Also coming back is Clingdre Robinson, who threw 137-feet 8-inches in the discus last season as a freshman. Octavian Flowers looks to have another big season with the discus, as he threw 120-feet 6-inches last season.

“We’re the No. 1 throwing school in Michigan since 1980,” stated Domerese. “And for a freshman, that’s one of the furthest throws we’ve ever had.”

Big things are also expected out of Antwon Curtis, a transfer student, who placed 12th in the state last season in the open 400 at Flint Northwestern. Coach Domerese wouldn’t go into detail, but stated that the current freshmen class may be the best he’s had in “a long time”.

“Our big thing is that we always try to win the Big Nine, obviously,” continued Domerese. “But our other big thing is to finish in the top 10 in the state. We’ve won four state championships since I’ve been coaching here. We’ve got a real good coaching staff, and that helps us a ton. If the kids work hard, usually pretty good things happen for them.”

As for the Lady Cavs, the two-time defending Big Nine champions are back with plenty of fire power. Although the end of the season at the state finals left a bitter taste in their mouth, the Carman- Ainsworth girls are locked and loaded for the upcoming season.

However, Brittany Banister, Valencia Lynch, and Tatyana Fykes were all lost to graduation in the off-season. “All three of those girls went on to the state finals, and they were members of my 4×100 and 4×200 teams,” said coach David Thrash. “They’re going to be very badly missed this year.”

Despite the losses, the Cavs have plenty of returning stars to rely on, with an abundance of seniors. Jalesia Johnson will compete in the quarter mile, and possibly in the 300 hurdles, as well, not to mention her high jumping ability. Kendra Carroll will also be in the quarter mile, as she was a state finalist a year ago. Basketball star Kapri Thompson returns to the quarter mile, and when healthy, Devin Willis will return after Easter. Willis hyper extended her knee during the indoor season.

State finalist Lariya Simpson also comes back to the 100-meter hurdles, and Markia Savage will be taking part in the 800-meter once she returns from a shin splint injury. Felicia Bryant will have to juggle between throwing the discus and playing for the Cavaliers’ soccer team.

“As always, we never go into a season not expecting to win the Big Nine,” continued Thrash. “Even though there’s only four teams in there, Flushing, Davison and Powers, they’re still good schools, and have some good kids. Nothing is going to be handed to us. We’re going to have to work extremely hard for everything that we get.” — B.P.