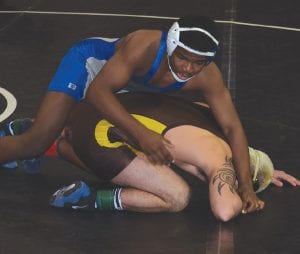 Malik Dawkins wrestles at the state finals last Saturday for Carman-Ainsworth at the Palace of Auburn Hills.

AUBURN HILLS — The Michigan High School Athletic Association Div. 1 individual wrestling finals at the Palace of Auburn Hills Feb. 28- March 2 never fails to provide a wealth of emotion on a multitude of levels, and 2013 was no exception.

For the Cavaliers, Malik Dawkins, 45-12 at 140 lbs., placed sixth after beating Portage Northern’s Jacob Heaps in 3:37 to start the event before falling to Holt’s Dominic Trevino, 5-1, in the match for fifth place. Dawkins also lost to Rochester Hills-Rochester’s Kaelan Richards in 4:17 prior to defeating Roseville’s Jeff Fresch, 3- 1, and Davison’s Carter Stoddard, 3-2, only to end up getting pinned in his fifth match in :37 against Davison’s Dominic Russ.

Senior Tae Pendleton, on the other hand, started this tournament by besting Temperance-Bedford’s Codie Bettencourt, 7-4 at 189. Pendleton, 42-7, then fell from grace by losing to Rochester Hills- Rochester’s Shawn Shadaia, 4-0, and East Lansing’s Trayvon Speed, 4-2 in overtime.

Junior Herbie Keskes, 15-8 at 171 lbs., was the only other Cavalier to post a win by getting the better of Battle Creek Central’s Jacob Taylor, 8-7. Keskes fell to Harrison Township L’Anse Creuse’s Devan Richter in 5:49 and Rochester Hills- Rochester’s Shane Shadaia by major decision 15-5.

Heavyweight Jerron Thomas, a junior, was eliminated after losing to Oxford’s Zach Wood by technical fall, 21-4, and Livonia-Churchill’s Manny Haddad in 3:37 to end the year with a record of 43-8.