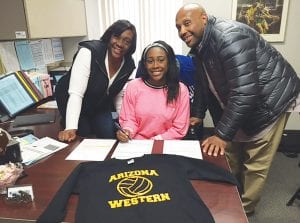 Tracee and Steven Lester surround daughter, Deja, as she signs her national letter of intent last Wednesday at the high school.

Arizona Western is a Div. 1 junior college that is ranked No. 6 in the nation. Lester is a three-year varsity starter at Carman Ainsworth where she earned all conference honorable mention in 2012, was named to the second team in 2013 and made first team this past fall.

“She works very hard and is a skilled player. Her drive and determination is outstanding,” said Carman-Ainsworth coach Barb Hurrand.