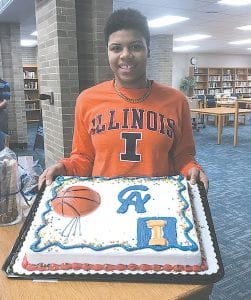 Aaliyah McQueen, a senior at Carman-Ainsworth, was set to enjoy a little icing on the cake after signing her national letter-of-intent to play college basketball at the University of Illinois last Wednesday at the high school. Photo courtesy Carman-Ainsworth athletics

FLINT TWP. – Aaliyah McQueen, a senior on the girls’ basketball team at Carman-Ainsworth, signed her national letter-of-intent to play basketball at the University of Illinois at a signing ceremony last Wednesday.

“I chose Illinois because it felt so comfortable and I was treated like family. I feel at home there,” said McQueen, who will major in computer science.

Looking ahead, McQueen said her biggest challenges will be “in adjusting to the speed of the game and doing the best job in the position the coach puts me in. I want to be a contributor for the team right away.”

McQueen added that she is also very excited to go to college and play ball.

“My coach said I will either be a small forward, a shooting guard, or point guard,” said McQueen when asked if she knew how she will fit into the team.

McQueen was surrounded by lots of family at the signing and she especially wanted to thank several of them.

“I want to thank my coaches, my grandma, and my mom,” McQueen said. “I know that my dad is looking down on me and I want to make him proud.”