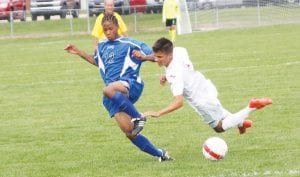 Jason Haynes works the ball up the field for Carman-Ainsworth.

FLINT TWP. — The Cavaliers were slated to host Saginaw on Monday in a Saginaw Valley League crossover contest, but the game was cancelled because the Trojans do not have a team this year.

In a contest rescheduled from Sept. 11, the Cavs lost a Saginaw Valley League- South game at home to Lapeer 1-0 on Sept. 12. Carman-Ainsworth goalie Tyler Springer still managed to step up and make eight saves, Lightning netminder Sage Payne made four saves and scoring the game’s only goal was Lapeer’s Jacob Schram with help from Sean Bopra.