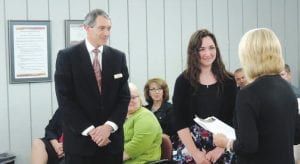 FLINT TWP. —When Alanna Gleason walked into the Carman-Ainsworth Board of Education meeting last week, she did not know that there was more in store for her than being recognized by her principal for outstanding academic success, with other classmates.

While updating the board on current activities, Alan Himelhoch, a member of the Carman Cougar Charities Corporation (CCCC) Board of Directors, hinted that the non-profit organization planned to give two scholarships to graduating seniors this year.

“It will be tough to follow up last year’s fake press conference, but, trust me, plans are underway and maybe we’ll be able to include at least a few of you in the presentation,” Himelhoch said.

After concluding his remarks, he then proceeded with the surprise announcement that Alanna had been chosen as the winner of the group’s 2016 Volunteer Leadership Scholarship.

Lori Sanders Vedder, CCCC’s scholarship chairperson, outlined soffffme of Alanna’s achievements. She carries a 3.99 GPA, is president of the National Honor Society and a captain of the golf team.

She has a long record of volunteerism dating back to gathering donations for the Armed Forces as a 9-year-old. While in high school, Alanna worked on food drives, assisted in report card pickup, junior high school Honor Society inductions, the Warrior Dash, Michigan School for the Deaf activities, knitted scarves for the homeless, volunteered at the United States Post Office can drive, served food and beverages to bus drivers on cold winter mornings and volunteered at Carriage Town Ministries.

During this time, she was dually enrolled in high school and college, earning credits towards a college degree. Alanna joined the American Sign Language Club and volunteered at Randels Elementary School three days a week to work with a visually impaired student. A brain tumor forced the student to leave school but Alanna said she learned a valuable lesson from the experience. “to never let life get you down. That’s the sole reason why I volunteer, to motivate myself and others to never stop trying,” she said.

Alanna became the CCCC’s second $2,500 scholarship winner through an application that was supported by six letters of recommendation extolling her virtues.

High school teacher Michael Gates said: “You truly have to experience the warmth and joy she brings every day of her life . . . She is a team player willing to go the extra mile to ensure success for everyone. She is task and goal oriented. No job is too big or small . . . Alanna is a “once in a lifetime” person. I haven’t come across a student close to her in my nine years of teaching.” — Rhonda Sanders