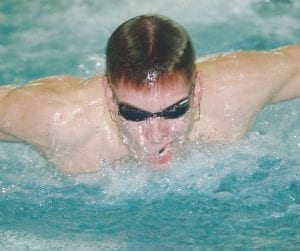 That’s not the case for fourth-year Carman-Ainsworth/Flushing swim coach Kevin McGlashen, though, who has 40 members from which to reload his squad that won the Big Nine title last season.

The Cavs also placed second at the County Meet behind perennial favorite and former Big Nine member Grand Blanc, still a staunch opponent in Genesee County, but a member of the Kensington Lakes Activities Association. McGlashen also sent two divers to the regional meet, but his boys missed the state meet in several events by several seconds.

“We should have a good season, but we are in a sort of rebuilding year with the losses,” McGlashen noted.

He tabbed Brighton and Royal Oak, teams new to his schedule this season, as some tough competition.

“And, as always Grand Blanc at the County meet and Brandon is going to be a good team again this season. Charlie Corazza does a really nice job with that team,” McGlashen said.

Big Nine foe Davison is under a new coach in Jennifer Redumski, who replaced Emily Cowen, but the Cards also lost a few to graduation. McGlashen will have to wait and see what Flint Powers brings to the table and who they lost from last season’s squad, but loading the schedule with tough programs in the state can only set his squad up for early success. Fenton and Brandon were touted by Swartz Creek’s coach, John Maxwell as being tough contenders and strong programs in the Flint Metro League that both squads will see at the County Meet and postseason.