FLINT TWP. — Every school has a class clown but how many can boast a class magician?

Jeff Olds, a 1986 graduate of Carman High School (now Carman-Ainsworth) is a professional magician based in Lansing. But his dad still lives in Flint Township and Olds often returns to Genesee County for bookings

Recently, Olds was in town for the Congregation Beth Israel Holiday Bazaar to sell magic products like his how-to DVDs and an amazing coloring book that with a flip of its pages changes from uncolored to colored to blank – made possible by magic crayons.

“I have created special magic shows for school assemblies including: “Reading is Magic,” “Math-Magic,” and “The Magic of MEAP,’’ he said. He also has created a “Harry Potter” themed magic show and seven special shows called “the Magic of Judaism” focused on the Jewish Holidays throughout the year such as Hanukkah and Passover. 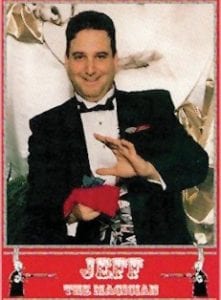 But Olds performs for audiences of all ages. One of his favorite tricks that wows the crowds at adult and corporate events is called ‘the Human Phone Number.’’ It involves Olds somehow pre-selecting a seven-digit phone number before it is randomly chosen by an audience member from a phone book.

Olds was bit by the magic bug at age seven, starting with hours of fascination over a Uncle’s cards tricks. When he was 10, his parents hired a magician to perform at his sister’s birthday party. That was a turning point.

“I remember that show like it was yesterday,” said Olds. “I sat there mesmerized and saw how much fun the magician was having. Even though part of me wanted to someday become a doctor or a fireman, the idea of becoming a professional magician was born that day.”

During his teen years, Olds honed his skills doing shows for family and friends.

“I performed a show at the end of my senior year for my AP English class that was very well received,’‘ he said. Also, as part of Carman’s National Honor Society, he did some free shows for children’s programs around the Flint area.

After earning a Bachelor’s Degree in Psychology from the University of Michigan in 1990 and a Master’s of Business Administration (MBA) degree in Marketing from Michigan State University in 1993, Olds started his magic company.

Over the years, he’s mentored many aspiring young magicians including one who is now performing full-time in Asia, he said.

Olds has taken his magic show on the road, traveling to appearances in California, Texas, Florida, Missouri, Illinois, Indiana, New Hampshire and throughout Michigan, he said.

For future bookings, Olds can be contacted at (517) 339-4-JEF or by email at jeff4magic@aol.com. He also has two web sites: www.jeffthemagician.com and www.lansingmagician.com.