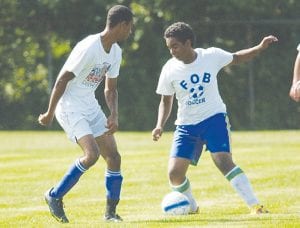 Carman-Ainsworth players scrimmaged against Kearsley in a pre-season battle.

OWOSSO
— The Cavaliers shut out Owosso Tuesday at Owosso. Kyle Gomez scored both goals from about 25 yards out in the first half. The first goal came with 24 minutes left and the second with seven minutes left in the first. The first goal was assisted by Yaakoub Aziz, while the second was an unassited goal off of a rebound. Colin Heaton got the shutout saving five shots.

“The Owosso game was up and down with Carman-Ainsworth controling 75 percent of the time,” Witham said. “If we learn to play unselfish and and make the simple quick pass, we might become a halfway decent soccer team, if we don’t it could be a tough season.”

“It was disappointing being up two nothing with 20 minutes left in the game and give up two goals because we lost focus and were not working as hard as we could,” Witham said.

Carman-Ainsworth defeated Clio, 1- 0, last Thursday, as Kyle Gomez scored in the 30th minute on a penalty kick to win the non-conference battle. Colin Heaton kept the Cavaliers in the game as he made some pointblank saves in the second half to preserve the victory.

Carman-Ainsworth is now 4-0-1. Its next game is September 7 against Saginaw Heritage at Carman- Ainsworth at 4:30.