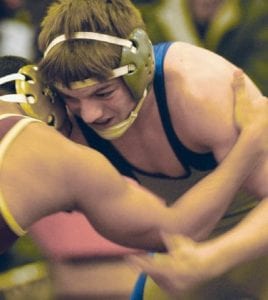 Cameron Martin was one of three Cavaliers who went 2-0 at Kearsley and 5-0 at Owosso.

Wesley Cummings, Cameron Martin and Jake Weissend all went 5-0 to win titles at 112, 145 and 152 pounds, respectively.

Jalen Boone placed second at 125, despite suffering a cut under his eye that later required stitches. The junior wrestled the final with vision in only one eye and his head wrapped in gauze, a la Jon Reader in the NCAA Championships last March.

Aaron DuPree also suffered an injury, to his shoulder, and had to default the final. The junior finished third at 119, but was back in practice

Carman had to void three weight classes because of injuries and other reasons, including state-ranked Tae Pendleton at 189. Lake Orion won the team title.

The Cavaliers opened their season Dec. 7 with a pair of lopsided wins at Kearsley. Carman beat the host Hornets, 48-24, and LakeVille, 52-27.

Brandon Wesley had two pins at 130 and Devon Schofield did likewise at 215 after being bumped up from 189. Cummings, Boone, DuPree, Martin, Weissend, Demetrius Hall and Domani Sylvester all went 2-0, with Weissend beating lifelong rival Matt Minus of Kearsley, 9-4, in a meeting of two of the area’s top wrestlers.

Carman hosted its own double-dual Wednesday night, with Lake Orion, Fenton and No. 1 Detroit Catholic Central’s B team coming to town. The Cavs will compete in the 30-team Genesee County Invitational this Saturday at Davison.