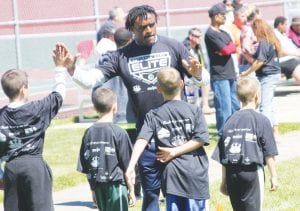 FLINT TWP. – Brandon Carr plays most of his football now 1,200 miles from home in the most prestigious league in the world with one of its most popular teams.

But he never forgets where he came from.

The Carman-Ainsworth graduate, now in his seventh year in the National Football League and third with the Dallas Cowboys, was back at his old high school last Saturday for the Elite Football Camp, an event sponsored by his Carr Cares Foundation.

The free, one-day camp drew more than 300 youths aged 7-18 from all over Genesee County. They learned the fundamentals of every position in football, and not just from Carr. With him were three of his Dallas teammates – Morris Claiborne, Sterling Moore and B.W. Webb – as well as Cam Bradfield of the Jacksonville Jaguars, former St. Louis Ram Clifton Ryan, former Michigan State football players Greg Cooper and Otis Wiley, and former Spartan and Detroit Piston Mateen Cleaves.

Carr, a 6-foot, 206-pound cornerback, was right in there with the rest of the instructors, teaching kids from first grade to 12th the proper footwork for an NFL defensive back.

“The fundamentals are where you get your start,” Carr said. “A lot of people miss out on the fundamentals and try to take the advanced step. We’re taking it back down to square one to teach them the proper footwork, the proper technique so they can be successful on the football field.”

The camp was not limited to skills. Carr and Co. continually stressed the hard work and sacrifice that are necessary for success. The t-shirts that every kid received included the words “Play hard, work harder,” and Carr broke every huddle with all the kids shouting, “Work hard!”

In previous years, Carr hosted a golf outing to benefit the Carman- Ainsworth football program, but he wanted to do more for football in general — and for more kids.

“I did the golf outing for four years and I just felt like I wanted to start doing something for the whole city,” he said. “The golf outing benefited Carman-Ainsworth football and the booster group. This is more to give back to the city that made me what I am.

“It’s a good opportunity for me to come back and tell these kids that the same field we’re on today, putting in this work, is the same field that I grinded my whole football career to get to the level I’m at now.”

The camp takes the place of a Carman-Ainsworth camp run by Cavaliers’ coach Nate Williams, who was only too happy to give up his weekend for the expanded Carr event.

“My little camp was just Carman- Ainsworth and there were only about 100 kids that would show up,” Williams said. “This is for all of Genesee County, any kids. We’re just trying to get them to fall in love with football and show them the work that it takes. I think it’s huge for our community in general. For Brandon to come back and bring some of his NFL buddies is huge.”

Williams coached Carman- Ainsworth to its best season in school history last fall, an 11-2 campaign that Carr was proud to see.

“It’s always good to look back and see your old teams doing well, just seeing the work they put in and the success they have,” Carr said. “I remember us growing up and grinding out here and finally putting together some good seasons and having a good run. They come in and put in the same work and keep the tradition going strong.”

Carr also sponsors a camp in Texas, but he is committed to returning to his hometown.

“He wants to do this on an annual basis,” said Troy Forte, event coordinator for the Carr Cares Foundation. “Eventually, he wants this to turn into a big weekend. We’re working on it, and this is step one.”

Meanwhile, Carr will return to his livelihood in Dallas. He was fourth on the team with 71 tackles last year, 60 of them solos. He also had three interceptions, returning one 49 yards for a touchdown, as the Cowboys finished second in the NFC East but out of the playoffs at 8-8.

“I love it down there,” said Carr, who previously played four years with the Kansas City Chiefs. “The city is great and there are a lot of opportunities there.

“We’re gearing up for a new season, a fresh start. A lot of guys have an extra chip on their shoulder, just ready to turn that corner and do big things in Dallas.”