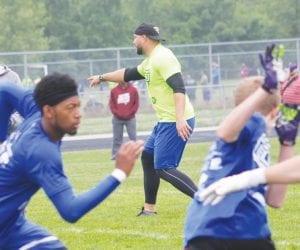 The second annual camp sponsored by former Cavs standout and current NFL player Brandon Carr was moved from the high school to the middle school this year to take advantage of larger facilities.

The camp was divided into a youth segment for kids ages 7 to eighth grade and a high school segment.

“At the lower level, they’re teaching every posi tion, because young guys don’t know what position they’re going to be in,” said Nate Williams, who just stepped down as Carman-Ainsworth football coach. “Up here at the high school level, they let them choose a position and they spend a lot of time on the fundamentals. There are a lot of everyday drills.”

Players worked on such skills as form tackling, ball drills, ball security, catching the ball, and fundamentals on the offensive and defensive lines.

Near the end of the 4 ½-hour camp, the high school players went into a 7-on-7 scrimmage format, with the offense running pass plays against the defense.

“Brandon’s idea is to keep getting the kids to fall in love with the game and keep them working,” said Williams. “Let them know football is fun, especially at that young age.

“Then, teach them some things. Every drill they learn today, if a kid goes home and keeps working on it, they’ll keep getting better.”

The camp was Carr’s second in three days. He coached last Thursday in the fourth annual Cowboys U event, a day where the Dallas players split into eight teams to coach 160 student-athletes from the Dallas-Fort Worth area. Carr’s team won the tournament, going 3-0 in round-robin play and then beating Jason Witten’s squad in the championship game.