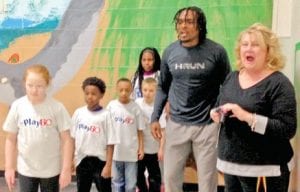 Dallas Cowboys cornerback Brandon Carr and Community Laision Sheena Satkowiak encourage Dye Elementary third-graders to push it to the limit during one of the activities inside the gym.

Through a program called Play 60 Read 20, Carr, in cooperation with the United Way, stresses the importance of a well-rounded workout. The students went through an hour of obstacle-course training in the school’s gym followed by a 20 minute reading session.

The reading took place in Dye Elementary’s “Reading Center,” which was implemented by Carr and the United Way last year after raising approximately $30,000 for the project. Two other centers were also installed at Durant-Turri-Mott and Doyle Ryder.

Carr is a graduate of the Carmen- Ainsworth school district and graduated college at Grand Valley State University.

Inside the school’s gymnasium, students were able to participate in various activities after being divided up into teams, while volunteers from the United Way were there to assist Carr. Some of the challenges included a relay race involving hopscotching through hula hoops, a football passing challenge and an activity in which students toss a mini football through hanging tires.

According to his Wikipedia page, Carr is currently working on starting physical fitness programs across Michigan and Texas.