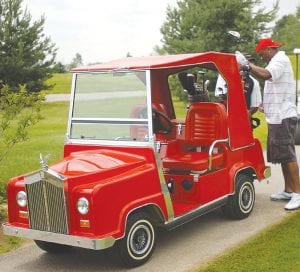 DAVISON
— Brandon Carr is a rugged, hard-hitting cornerback for the Kansas City Chiefs, but the Carman-Ainsworth alumnus has a genuine appreciation for the gentle game of golf.

Carr hacked his way around Sugarbush Golf Club on June 26 as part of the second annual golf outing he hosted to benefit the Cavaliers’ football program.

“I didn’t know golf was so much of the little things,” he said after his round. “You have to keep your head down. It’s my second nature to play corner, and coming out here and trying this is a different experience. I respect the golfers and what they do, especially at the professional level.”

He did at least travel in style through the 18-hole round, driving a fire-engine red, Rolls-Royce model golf cart donated by auto dealer Patsy Lou Williamson.

Suffice it to say, his team didn’t win the four-man scramble. Carr and his father, John, along with fellow Carman-Ainsworth alum Terrance Robinson and Carr’s Chicago-based agent finished at 1-underpar 71.

“I started off kind of shaky,” Carr said. “I had all the cameras on me when I first started, and I was spraying balls. I probably donated about nine balls to Sugarbush. But me and him (Robinson) got it going on the back nine.”

Robinson is now an assistant football coach at Alcorn State.

Another former Cav and current NFL player, Dan Skuta of the Cincinnati Bengals, was scheduled to play but withdrew to attend the funeral of friend Joe Johnson, a 2004 Carman-Ainsworth grad who died June 16 in Afghanistan.

The golf outing raises funds for the Cavaliers football program and included a silent auction of three footballs and a Chiefs seat cushion signed by Carr, as well as a Bengals cap signed by Skuta.

“It’s all about giving back,” Carr said. “Carman- Ainsworth is where I got the opportunity to showcase my talents in football at the high school level. That propelled me into Grand Valley State, which in turn got me to the Kansas City Chiefs.”