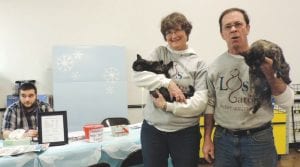 Sandra Monaghan (right) and Los Gatos volunteers are at PetSmart every weekend with several cats ready to be adopted. It is one of two local pet stores where they will be selling 50-50 raffle tickets for the next four months as a fundraiser for the non-profit rescue operation.

FLINT TWP. — The township board approved a state Charitable Gaming License for Los Gatos Foster Animal Cat Rescue that will allow the organization to hold a 50-50 raffle at pet stores in Flint Township.

Los Gatos is based in Davison, which has no pet stores, so its adoptions are hosted every weekend at PetSmart, 4061 Miller Road, from 1-8 p.m. on Fridays and noon to 8 p.m. on Saturdays.

The gaming license is good for four months and will help the non-profit group raise money to shelter and prepare rescued cats (and some dogs) for adoption.

The animals are taken in off the streets, from abandoned houses, veterinarian offices and other circumstances, said Sandra Monaghan, Los Gatos founder and director. Los Gatos (which means the cats in Spanish) is a 501(c)3, volunteer, no-kill foster organization funded 100% by donations. It has no paid staff and received tax exemption status in November 2013. But it has existed “in spirit” for many years, Monaghan said. 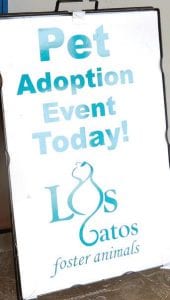 Back in the 1990s, Monaghan became a foster cat parent after a stray walked up to her house and had kittens in her garage. She volunteered to become a foster home for Companion Cats Adoption Agency and the rest is history, she said.

A retired postal worker, Monaghan now heads up a network of Los Gatos foster home volunteers who care for the animals until they are healthy and ready for placement. That’s usually a minimum of about two months, she said.

They handle mostly cats but right now have two dogs – Bonnie and Clyde – also under their care.

The animals have to meet PetSmart’s requirements for adoption including being spayed, neutered and vaccinated for rabies. Spaying/neutering costs are included in Los Gatos’ adoption fees.

“We have been averaging four adoptions a week.” Monaghan said of the PetSmart weekend arrangement where other animal rescue groups also operate.

“We understand about their personalities and that helps us to match the right cat with the right home,” she said.

Among 10 cats available for adoption last weekend was a trio of siblings who spent the first four months of their lives cooped up in a bathroom with no access to the outdoors or even a window to look out of.

“There were six kittens and a mom so imagine what their living conditions were like,’’ Monaghan said.

Also available is Cheddars, a cat that literally dragged itself to a doorstep seeking help. It was severely malnourished and nearly hairless due to an allergic condition called fleabite dermatitis, Monaghan said.

“She has been nursed back to health and obviously is not missing any meals now,’’ she said of the furry feline sitting calmly in a cage.

Two other ready-for-adoption cats lost their home when a foreclosure forced their owners out of their home and they could no longer afford to keep pets.

For more information about Los Gatos or to volunteer or donate, visit its website at losgatosfosteranimals@gmail.com