Catching up with Dustin Swerdan 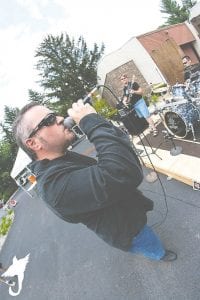 Editor’s note: Contributing writer, John “JD” Dombrowski, reports regularly for the View Newspapers on the topics of local bands and the local music scene. JD’s voice is familiar to many readers through his connections with the Flint and Genesee community as a local business owner, Burton Chamber of Commerce Chairman, promoter and through his own bands.

I had the opportunity to catch up with 711 Entertainment’s Dustin Swerdan on September 23rd between his guest hosting spot on the Local Scream internet radio show (thelocalscream.com) in the morning and preparation for his landmark Twentieth 711 Entertainment By Showcase at Flint’s world famous Machine Shop concert lounge later that evening. Add the previous night’s third shift worked at General Motors to that schedule and you can see how 711 has turned into more of a 24-7 experience for Dustin- and he wouldn’t have it any other way.

“I love the live music experience and I approach every show I put together as a music fan first; I book bands that I have seen perform that left me wanting to see more.” It’s an approach that has allowed him to enjoy the burgeoning Mid-Michigan original Rock scene from both sides of the stage.

“In 2011, I threw a birthday party for a friend at a local club and hired a couple of my favorite local bands to play. It went over so well I was asked by the club owner to put more shows together for him; one thing led to another and soon I was had become the talent buyer at several local clubs.” In 2014, Dustin put together his first 711 Showcase concert at the Machine Shop, featuring locally sourced original music bands that he had worked closely with and it has been a successful arrangement that has lasted for 20 shows so far. “I can’t thank The Machine Shop’s owner Kevin Zink enough for all he has done to encourage me as well as bolstering a local music scene. When I started doing this, there were not very many places you could find original music being played and now you can catch Indie bands playing at least a half dozen places around Genesee County any given weekend.” All thanks to guys like you, Dustin.

VIDEO OF THE MONTH: For a piece of absurdist rock and roll film making that will do nothing to allay your distaste for clowns, check out the brilliant Paco Higdon’s “Clownin’ Around” on youtube.com