Cause of fatal still unknown 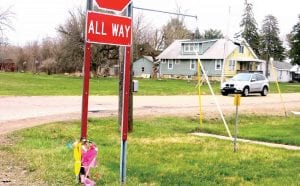 Flowers have been placed at the intersection of Court and Dye in memory of Taylor Kerckaert, 15, who died there on April 1, as a result of a car accident.

FLINT TWP. — Someone has tied a bright bouquet of flowers to a stop sign at Court Street and Dye Road where 15-year-old Taylor Kerckaert of Durand, died Friday, April 1 as a result of a car accident.

The crash involved four vehicles; a pickup truck, a minivan, and two sedans. Taylor was a passenger in the minivan being driven by her mother, who was also severely injured in the accident and hospitalized. Other passengers in the minivan — an 18-yearold male from Flint Township, and a 9-year-old male from Durand — were not injured.

Police said the minivan was east- bound on Court Street and the pickup truck was southbound on Dye Road when the accident occurred. The two sedans were stopped behind one another on Dye Road, south of Court Street, at the stop sign. Those vehicles were impacted by the crash of the minivan and pickup but sustained only moderate damage, police said.

This crash still remains under investigation by the accident reconstruction team in an effort to determine who was at fault.

Alcohol did not appear to be a factor.

The Flint Township Police Department is requesting anyone that may have witnessed the crash to contact Sergeant Frank Hartner or Detective Hart at (810) 600-3250.

The Court-Dye intersection was also the scene of a fatal accident in 2010 and also several non-fatal accidents. Because of the high number of accidents, the Genesee County Road Commission (GCRC) proposed placing a roundabout there in 2012 but the plan was not favored by the township board or residents and was eventually “indefinitely postponed.”

As a result of the accident, plans for placing a roundabout there are currently under review, said John H. Daly, road commission manager director. With regard to traffic safety and management, the GCRC reviews all accidents for the roads under its jurisdiction when an accident occurs that results in fatalities or serious injuries, he said.

A gofundme page set up for the Kerckaert family had raised $16,160 as of Tuesday. Information on that page also shared that Kathy Kerckaert, Taylor’s mother, has been discharged from the hospital and is resting at home and that funeral arrangements for Taylor will soon be announced.

Taylor was a 10-grader at Swartz Creek High School. Donations to her GoFundMe page can be made at www.gofundme.com/kerckaert