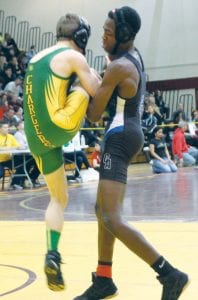 Elijah Brandon (right), here wrestling in the Genesee County Tournament on Dec. 19, got one of Carman- Ainsworth’s four pins against Hastings last Tuesday at Montrose.

MONTROSE – Carman-Ainsworth won half the matches but dropped a 42-36 decision to Hastings in a non-league wrestling dual Tuesday at Montrose.

Nathan DeLong opened the meet with a wild 19-14 decision over Mitchell Sarhatt at 135 pounds to give the Cavaliers a 3-0 lead, but Hastings’ Kip Beck pinned Coreyonte Thomas in 5:13 to give the Saxons a 6-3 lead. Dominic Pino followed with another Hastings fall, pinning Travis Gilbert in 3:51 at 145 for a 12-3 lead.

Carman-Ainsworth’s Joe Stewart snapped the string with an 8-3 decision over Tyler Youngs at 215, and Ronald Roland pinned Trevor Ryan in 2:32 to pull the Cavs within 36-12.

Two more Carman-Ainsworth falls followed, with Elijah Brandon pinning Jaden Hickman in 1:37 at 103 and Jacob Yost pinning Alex Allerding in 50 seconds at 112 to get the Cavs within 36-24.

Hastings’ Kenny Smith clinched the win for the Saxons by pinning Anna Alfaro in 59 seconds at 119 to make it 42-24 with two matches to go.

Cheng Yang pinned Hastings’ Andrew Miller in 2:56 at 125 to pull Carman-Ainsworth within 42-30, and Roosevelt Powell III received a forfeit victory at 130 for the final score.

Carman-Ainsworth will host a Saginaw Valley League meet next Wednesday against Midland Dow, Davison and Saginaw.