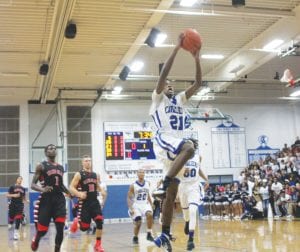 Carman-Ainsworth’s Omari Duncan, here breaking away for a layup in the season opener, led the Cavs with a game-high 19 points against Flushing on Tuesday.

FLUSHING – Omari Duncan lit up the floor on Tuesday with seven field goals and a 3-pointer as the Carman- Ainsworth varsity boys’ basketball team earned a 53-31 non-league victory at Genesee County rival Flushing.

While the Raiders were able to counter with a 13-point performance from Joe Kujat, the Cavaliers sported a 9-3 offensive advantage in the first quarter and an 18-11 lead at halftime. The margins only increased after that, including 15-6 in the third to extend the lead to 33-37 and 20-13 in the fourth.

“It was a low scoring, slow starting game. They started in a 3-2 zone and we actually got some looks from the spots we talked about getting to. We just couldn’t knock down any shots in the first half,” said Carman-Ainsworth coach Jay Witham. “Then in the second half we actually hit some shots. We had their offensive sets down from watching film. They like to do a lot of high-low action. Our big guys did a good job handling their big guys. We also did a very good job on the back side wing helping out on the high-low action.”

Chan Pearson also put up a trio of 3-pointers for Carman-Ainsworth to score nine, Aaron Williams and Michael Fletcher both threw down three field goals for six points and posting five points apiece were Terry Armstrong and Ja’Kavien Lewis. Jaylen Bradley went 1-for-2 from the free-throw line for one point. Carman-Ainsworth had 15 field goals, four 3-pointers and went 11-for-17 from the line.

“Fletcher and Bradley did a great job defensively. They didn’t do much scoring, but they stopped (Flushing’s) guys,” Witham said. “We went to four guards and I had to put Duncan on one of their big guys, and he was just quicker on his feet. He did a great job defending. Armstrong did a good job defensively, but offensively he was a little slow getting out. His length helped us out rebounding the ball. He as more of a defensive factor than an offensive factor.”

For Flushing, Collin Emmendorfer had five points, Jake Matus added a field goal and going 1-for-3 from the charity stripe was Lamonte Ellis. As a team the Raiders posted 11 field goals and went 1-for-3 from behind the arc and 6-for-12 from the free-throw line.

In Saginaw Valley League-South road action last Friday, Armstrong ended the game with 15 points, two rebounds, two steals and one assist after starting it with a two-handed slam dunk, which led to the Cavaliers scoring early and often on their way to a 77-47 victory at Powers. Lewis also came through with 21 points, five steals, three assists and one rebound, Duncan added 15 points, three boards, one steal and an assist and Fletcher had eight points and six rebounds.

For the Chargers, Corey Townsend posted 12 points and six rebounds and scoring nine was Noah Sargent. One key to this contest was Carman- Ainsworth outscoring Powers in every quarter, 16-6 in the first and 19-13 in the second to go into halftime leading 35-19. The Cavs also claimed a 23-14 offensive advantage in the third to go up 58-33 heading into the final session and 19-14 in the fourth.

Carman-Ainsworth suffered its lowest-scoring game of the season Tuesday night, falling to Flushing 50-26 in a non-league contest at home. The Lady Cavs had been averaging 60 points a game and were on a three-game winning streak, but the Raiders held them to five points in the first quarter, eight in the second and one in the fourth. Shakara Johnson led the Cavs with nine points and Destiny Strother scored eight.

Last Friday, the Lady Cavs broke open a close game in the fourth quarter and beat Flint Powers Catholic 58-41 in a Saginaw Valley League- South Division game at home. Carman-Ainsworth led 14-13 after one quarter and 25-17 at halftime. Powers rallied to within 35-31 in the third quarter, but Carman-Ainsworth dominated the fourth 23-10 to improve to 2-2 in the SVL-South.

Strother led a balanced attack with 14 points and eight rebounds. Randi Richardson added 12 points and seven boards, and Johnson had 11 points and 14 rebounds. Chelsey Carpenter had 11 rebounds to go with six points.