Cavalier cross country will be inexperienced 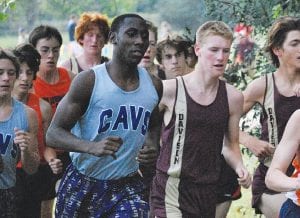 The Cavaliers will have to break out of the pack without their top male runner, Glenn Cosey.

FLINT
— Carman-Ainsworth boys’ cross coach Kenn Domerese is looking at a rebuilding situation this season, as his Cavalier squad will not be as strong as it has been in the past. Low numbers have limited the options this season, and the loss of state qualifier and Big Nine champ Glenn Cosey does not help the Cavaliers chances either. Cosey, who placed fourth at the regional and ran in the state finals is now playing basketball for a college in Columbus, Ohio. Compound that with a couple of seniors Domerese was counting on returning not coming out for the team and it has him scrambling for this season.

Not all is lost for Carman however, as Domerese has two experienced runners back. Alec Neilson and Jerry Stubblefield return to help anchor his squad for the season.

“I hope our two guys do well this season,” Domerese said. “We don’t have a particularly strong team, but hopefully that will be helped when school starts, perhaps some more kids will want to join. Until then, we will try to get the kids we have as far as we can.”

While the Carman boys are looking for runners, the Cavalier girls’ team, led by David Thrash will have solid numbers and some talented runners returning for the 2010 season. Thrash, who has been coaching cross country since 1980 and at Carman since 1987 lost a very talented runner in Jessica Saunders. Saunders alternated between the number one and two runner for the Cavaliers last year. She also is a soccer player at Carman and was the kicker for the football team. Thrash is sorry to see such a talented athlete go, but believes he has two skilled runners remaining that can pick up the slack.

Lauren Foote will be counted on to be the Cavaliers number one runner this season, and she and Thrash have set some lofty goals for her to work to attain this year.

“We set the bar high for Lauren,” Thrash said. “We believe it is realistic for her to work to be the Big Nine champion and to reach our school record of 18:53. She ran a 19:01 last season, and if she puts her mind to something she is the kind of kid that will work to attain it.”

The other key returner for the Cavs is Dana Cardinal. Thrash talked of all the miles Cardinal has put in over the summer getting ready for this season, and had some goals in mind for her, as well.

“We have a top ten list in our gym,” Thrash said. “Lauren and Jessica are already numbers two and three respectively, and I believe that if everything goes right this year that Dana can join them. If she can reach that goal, my other goal for her of reaching the state finals should take care of itself.”

Thrash sees Powers and Flushing as the favorites in the Big Nine race this year, but doesn’t count out his Cavalier team.

“We will be competitive and with a couple of breaks you never know what could happen,” Thrash said. “I want to win as bad as the next guy, but I want my team to improve from year to year. If we keep improving from year to year we have accomplished much, and if we should happen to win a championship along the way, it is a great byproduct of that.”