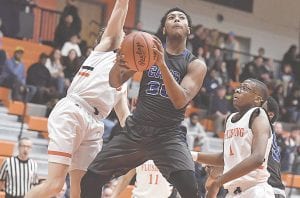 Carman-Ainsworth’s Rasheed Brown attacks the hoop on his way to nine points against Flushing on Monday night. Photo by Todd Boone

The Cavaliers led 12-10 after the first and 25-22 at half before taking over with a 23-14 run in the third quarter. Carman-Ainsworth then sealed the victory with a 14-12 fourth quarter.

Jayden Nunn scored a game-high 18 points for the Cavs, including a pair of triples. Isaiah Jones finished with 16 points while going 8-for-8 from the free-throw line. Rasheed Brown added nine points, and Mehki Ellison scored seven.