Cavalier wrestlers second by one point at tourney 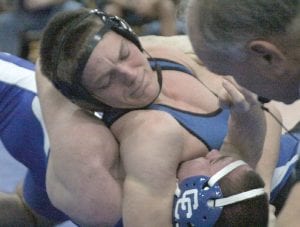 Cameron Martin puts the squeeze on an opponent in a match earlier this season. Martin went 5-0 at the Montrose Holiday Tournament on Tuesday.

MONTROSE — Four Carman-Ainsworth wrestlers went 5-0, and the Cavaliers finished 4-1 as a team to take second place in the Montrose Holiday Tournament on Tuesday.

Carman’s only loss was to Lansing Waverly, 38-37. The Cavs beat Mt. Morris, Flint Northern and Owosso and capped the night with a 61-12 rout of Hemlock.

Winning all five of their matches for Carman-Ainsworth were Wesley Cummings at 119 pounds, Cameron Martin at 140, Jake Weissend at 145 and Tae Pendleton at 171.

Carman-Ainsworth is off until Jan. 7, when it will travel to the Rochester Adams Invitational.

Tae Pendleton went 5-0 at 171 pounds in the Montrose Holiday Tournament.