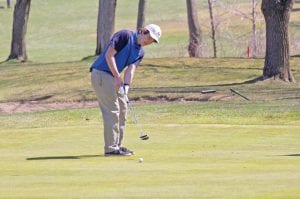 Aaron Floyd and Tyson Fields each shot 98 and Ryan Macko carded 99 to lead the Cavaliers. John Karbowski was close behind with a 101 and Noah Vanderhyde a stroke behind him at 102.

Flushing’s Joe Montpas was medalist with a 70, three strokes ahead of three other golfers.

Carman-Ainsworth was scheduled to play a non-league dual meet at Saginaw Nouvel last Wednesday, but the match was canceled by Nouvel.

The Cavaliers will host Holly in a non-league dual Friday at Fenton Farms.