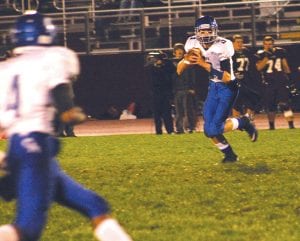 Carman-Ainsworth quarterback Connor Storms rolled out in a game earlier this season. Storms occasionally relieves Shane Barron at the position and is being groomed as the qaurterback of the future.

BURTON — Carman-Ainsworth’s hopes to win sole possession of the final Big Nine Conference football championship ran into a brick wall last Friday, as the Cavaliers were shut out by Flint Powers Catholic, 14-0, at Holy Redeemer Field.

Carman already owns a share of the title at 4-1 and can still take the crown outright if it beats Davison at home this Friday. A loss would leave the Cavs and Davison tied at 4- 2, and Powers could make it a three-way tie if it beats Flushing. This is the final year of the Big Nine Conference, as all four schools will join the Saginaw Valley League next fall.

This time, Carman never got into the red zone against Powers, penetrating no further than the Chargers’ 31-yard line, and totaled just 160 yards of offense. One week after setting a Flint-area record for quarterbacks with 337 rushing yards, Shane Barron managed only 60 yards on 17 carries.

Powers scored a touchdown in each of the first two quarters, both on short runs by Nick Sullivan. Carman shut out the Chargers in the second half, but couldn’t get on the scoreboard itself.

The Cavs forced a three-and-out on Powers’ first possession, then got a 50-yard run by Jevonte Alexander on their first offensive series. But the play was called back for a holding penalty, and Carman had to punt. Powers followed with a long pass play that set up its first touchdown, on Sullivan’s one-yard run with 5:45 left in the first quarter .

The Cavs reached the Powers’ 31 near the end of the period, but ran out of downs there and never got that far again. Powers put together a 71-yard, five-minute drive in the second quarter to go up, 14-0, on Sullivan’s seven-yard run with 4:28 left in the half.

The Cavs reached the Powers 41-yard line three times in the second half, but couldn’t sustain the drives and suffered their first shutout loss of the season.

At 4-3 overall, Carman needs to win its last two games to clinch its first playoff berth since 2006. The Cavs will visit Ann Arbor Huron for their regular-season finale Oct. 21. Huron is 1-6 going into this week.