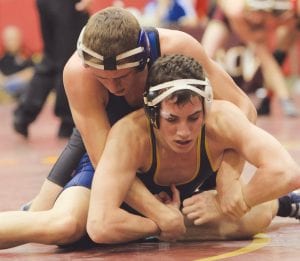 DAVISON — The Carman-Ainsworth wrestling team entered last Saturday’s individual district tournament with a lot of confidence after winning a team district title on Thursday. It showed on the mat as six Cavs’ wrestlers advanced to the regional tournament on Saturday.

Carman was led by district champion Jake Weissend at 135 lbs. Weissend started the day with a fall against Chris Longoria of Midland at 1:59. He followed that with a fall of Grand Blanc’s Parker Wheatley in the semifinals at 1:59. In the finals, he defeated Oxford’s Mike Thomas, 3-1.

CJ Ballinger and Tae Pendelton both advanced with second-place finishes last Saturday. Ballinger started the day with a 10-1 decision over Marty Giannola of Oxford followed by a 5-2 victory over Charles Proctor of Bay City Western. He lost to Korey Reinhardt of Bay City Central in the finals, 2-1.

Pendelton defeated Brennan Ayers of Bay City Western, 20-9, in his first match and Domenic Diaz of Davison, 8-7, in the semifinals. Pendelton was pinned by Knute Hoffman of Midland in 3:54 in the finals. 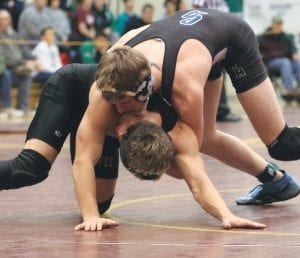 Also advancing for the Cavaliers were Mark Byrd at 285 lbs. and Aaron DuPree at 119 lbs. with third-place finishes and Alex Fetterman at 189 lbs. with a fourth-place finish.

The Cavs battled Bay City Western yesterday in the team regionals semifinals. The winner took on the winner between Oxford and Saginaw Heritage for the title.

On Saturday, the six regional qualifiers will travel to East Kentwood and try to advance to the state finals at the Palace of Auburn Hills.