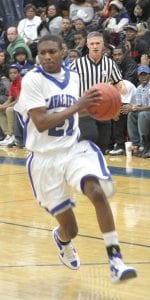 FLUSHING — The Carman- Ainsworth boys’ basketball team entered district play with confidence, but knowing it had a tough road to a title with Saginaw and Saginaw Arthur Hill waiting in the wings.

The Cavaliers took the first step down that road with a 56-40 victory over Owosso in the district opener on Monday. The Cavs were ready from the start, as they jumped out to an early, 14-8, lead and increased their halftime lead with a 16-9 advantage in the second quarter.

The second half was closer, but Carman- Ainsworth still outscored the Trojans, 14-12, in the third quarter and, 12-11, in the fourth.

Denzel Watts stepped up once again for the Cavs with 24 points, while Justin Person added 12 and Jaylen Randle added nine. Owosso was led by Robert Geoghegan with 17.

Last Thursday, Carman-Ainsworth ended the regular season with a 68-41 victory over Ortonville- Brandon. The Cavs jumped out to a 19-4 lead after one quarter and led, 43-16, at the half. The second half saw both teams score 25 points.

Watts came through with 24 points, 11 assists, eight rebounds and four steals, while Person added 17 points and three boards and Randle chipped in with 12 points.

The Cavaliers, 14-7 overall, faced off with Saginaw Arthur Hill, 15-5 overall, yesterday after our deadline. The other side of the district bracket features Saginaw, 18-2 overall, versus Flushing, 1-19 overall.