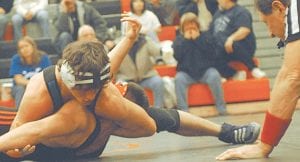 Carman-Ainsworth’s Jake Weissend, shown at an earlier season meet, moves on to the state finals.

Junior Jake Weissend won the 135 lb. weight class by defeating Oxford’s Mike Thomas in the finals, 3-2. He opened the tournament with a 7-1 decision over Dominic Rens of Hudsonville followed by a 5-4 victory over Patrick Rooker of Davison.

Mark Byrd took second place at 285 lbs. after being pinned by Davison’s Ryan Hankins in the finals at 3:01. The junior won his first match over Tyler Rose of Grand Haven, 9-4, and won his semifinal match against Brandon Midcalf of Saginaw Heritage, 4-2

Not qualifying for the state tournament were Aaron DuPree at 119 lbs., CJ Ballinger at 140 lbs., Tae Pendelton at 171 lbs. and Alex Fetterman at 189 lbs. 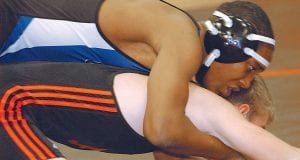 Carman-Ainsworth’s Tae Pendelton was one of several Cavs’ wreslters that did not make it out of the regional tournament.