Cavaliers back on track with 49-0 romp 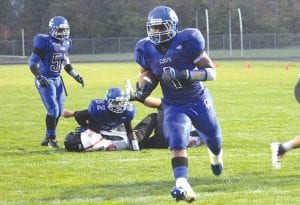 FLINT — Carman-Ainsworth bounced back from its only loss of the football season to smash Flint Southwestern Academy, 49-0, in a Saginaw Valley League game last Friday at Atwood Stadium.

Connor Storms passed for two touchdowns and ran for another as the seventh ranked Div. 1 Cavaliers shook off the previous week’s loss to No. 1 Div. 5 Flint Powers Catholic. Carman- Ainsworth improved to 4-1 in the Valley and 7-1 overall, reaching seven regular-season wins for the first time since 2003.

The Cavaliers started slowly, failing to score in the first quarter, but exploded for 21 points in a five-minute span of the second period. Gerald Holmes broke the scoreless deadlock with a 10- yard touchdown run with 6:22 left in the half, and Demarion Allen made it 13-0 with a 16-yard touchdown catch from Storms at 4:29.

Holmes tackled a Southwestern runner in the endzone for a safety at the 2:18 mark, and the Cavs were back in the endzone less than a minute later with another touchdown. After the Knights’ free kick, Carman-Ainsworth took over at the Southwestern 47. Storms hit Brandon Walker with a 30- yard pass, and Malik Seales followed with a 17-yard touchdown run on the next play for a 21-0 lead with 1:38 left in the half.

The third quarter was deja vu, as Carman-Ainsworth again scored 21 points in less than five minutes, including another safety. Walker caught a 33- yard scoring pass from Storms at 6:53 for a 27-0 lead. Lorenzo Redmond scored from the five-yard line at the 5:09 mark, and Jack Baker tackled a Southwestern ballcarrier in the endzone for safety to make it 36-0. Seales scored on a five-yard run with 1:27 left in the period for a 42-0 lead and a running clock for the fourth quarter.

Storms completed the scoring with a one-yard touchdown run with 59 seconds left in the game. The junior quarterback finished with 101 yards passing on 5-of-12 accuracy, including two to Walker for 60 yards. Redmond rushed 10 times for 68 yards, Seales carried nine times for 58 yards, Holmes had six rushes for 34 yards and Nate Williams ran the ball six times for 19 yards.

Buddy Roe led the defense with five tackles and a sack. Seales, Allen and L’Daryl Mosley each had four tackles.

Carman-Ainsworth will complete its regularseasonwitha7p.m.homegame Friday against Davison.