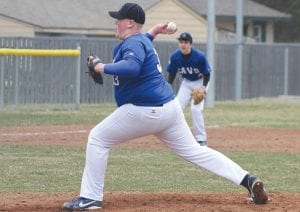 MOUNT PLEASANT — The unstable weather that’s plagued the prep sports scene this spring has laid waste to the Carman-Ainsworth varsity baseball team’s early-season schedule. In fact, the Cavaliers currently find themselves on a six-game losing streak after being forced to play 10 games over the course of seven days.

On Monday that curse followed Carman-Ainsworth to Mt. Pleasant for a doubleheader that ended with the squad getting swept, 10-0 and 8-2.

“In game one, seven of the first 10 runs were not earned and and in game two five of the first eight runs were unearned. When you play a team like Mt. Pleasant you can’t give them runs,” said coach Tom Miller. “Noah Reed had the lone hit in game one and in game two, Alex Thompson, Brandon Bobcean, and Duane Haskins each had a hit. Carman-Ainsworth had left eight runners on base. The one good thing in ths stretch is the team’s ability to put the ball in play. Last year, we averaged over 15 strikeouts in a doubleheader. This year we have cut that in half to six strikeouts per doubleheader.”

The Greater Flint Tournament last Friday proved just as challenging for the Cavaliers, who lost to Flint Metro League rivals Linden, 15-4, and Kearsley, 15-0.

“With it being the seventh and eighth games in five days, we did not have a lot of pitching to help,” Miller said. “Even thought pitching has not been the problem, we have had some tired and sore arms in the field.”

At the forefront of this downward turn for Carman-Ainsworth was a pair of Saginaw Valley League losses to Flushing, 9-1 and 6-2, on April 25.

“In the doubleheader Carman- Ainsworth had given up three earned runs, but had seven errors that cost them,” said Miller. “Carman-Ainsworth had on only six strikeouts, but left 13 runners on. We hurt ourself in the field and never got the big hit to change the momentum.”

Having started 2013 by winning the first-five games it played, the Cavaliers, 5-6 overall, 4-2 SVL, host Flint Northwestern for a conference twin bill today.