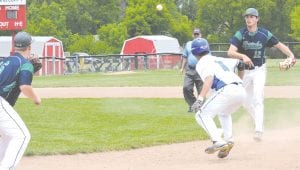 Carman-Ainsworth’s Christian Buchanon gets caught in a pickle against Heritage during Saturday’s district tournament.

SWARTZ CREEK – Carman-Ainsworth’s baseball season came to an end on Saturday when it fell to Saginaw Heritage, 11-2, in the district semifinal after drawing a firstround bye.

Heritage was on fire on both sides of the game, collecting 14 hits and four home runs while pitcher Brandon Smith went 6-1/3 innings while giving up only two earned runs.

For the Cavaliers, Matt Durbin and Christian Buchanan had a hit and an RBI each to provide the only runs for Carman-Ainsworth.

Heritage moved on to beat Swartz Creek 4-0 for the title. In last week’s district opener, Flushing had defeated Arthur Hill 10-0, but fell to Swartz Creek 5-4 in nine innings, allowing Creek to advance to the final against Heritage.