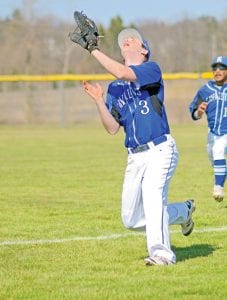 Infielder Garrett Gleason gets underneath the ball for Carman- Ainsworth against Lapeer on April 14.

FLINT – With the duo of freshman Garrett Gleason and senior Jawanza Edwards hitting on all cylinders, the Carman-Ainsworth varsity baseball team dominated the first game of a Saginaw Valley League crossover doubleheader on Monday at home against Saginaw Arthur Hill winning 18-0 in three innings.

“The first game was a little one-sided as the Cavaliers put up large numbers. Garrett came up when we lost a player during the season and has played remarkably well, fielding a new position and giving us quality at-bats,” said Carman-Ainsworth coach Steve Faculak. “Edwards has continued his success as a junior with his outstanding play in center field. Some diving plays have really been the difference in a few games so far.”

The nightcap was a much closer affair highlighted by an 8-1 victory for the Cavaliers in seven innings.

“The second game was better matched,” Faculak said. “We have had our struggles this season playing ranked teams early in the schedule such as Mt Pleasant and Saginaw Heritage, (which are) ranked seventh and eighth in the state. Our goal is to be more productive at the plate and continue to play good baseball for the remainder of the league. We believe we have players performing at a high level, with a few that have not yet hit their stride. A slow start, but we’re hopeful that we can still make a mark.”

The Cavs, 3-5 SVL, host Grand Blanc tomorrow before traveling to Midland on Monday.