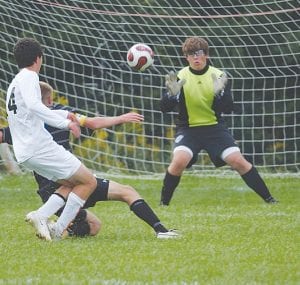 Cavaliers keeper Colin Heaton braces for a save in last week’s game at Flushing.

FLINT TOWNSHIP
— Carman- Ainsworth coach Jay Witham knew going in to Wednesday’s match-up with Flushing that it was going to be a close and exciting game, what he didn’t know is how close it really would end up as the Raiders scored a goal off of a penalty kick with 8 seconds remaining to tie the Cavs 2-2.

The Cavaliers lit up the scoreboard first as Todd Borkowski scored an unassisted goal off a deflection seven minutes into the game, and Kyle Gomez scored at the 25 minute mark of the first half off an assist from Brandon Swirsk.

Flushing wasn’t going to give in however, as James Robinson scored off of a bicycle kick at 17 minutes remaining in the first to keep the game close going into half. “Flushing had us on our heels in the second half,” Witham said. “They played a great game.”

The teams stalemated for most of the second half, until the aforementioned penalty kick was awarded to Flushing with the penalty kick being scored by Jon Wolbert to even the score.

Carman-Ainsworth keeper Colin Heaton played great in goal with 15 saves, while his counterpart in the Flushing net Derek Barton had 5 saves.

“It was great game and for it to be decided on a shaky call with 8 seconds left at the edge of the box was pretty poor,” said Witham. “The game was being videotaped by the MHSAA and will be open for viewing soon, I can’t wait to see the film.”