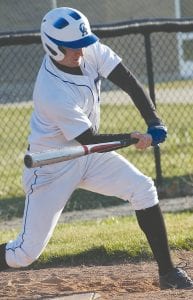 Josh Smith takes a cut for the Cavaliers.

FLINT TWP. — The Carman- Ainsworth varsity baseball team proved it wasn’t going out without a fight this year in Tuesday’s season opener, forcing Linden into an extrainnings affair that ended after nine innings in a 7-4 defeat.

In a contest that was back-andforth throughout, the Cavaliers had worked their way to a 2-1 lead through five innings of play before Linden was able to score twice in the top of the sixth to go up, 3-2, setting up Jake Weissend to tie the game up in the seventh for Carman- Ainsworth on a throwing error by the Linden catcher.

And that’s how things would stay until the top of the ninth inning when Linden scored four runs on three hits, including two RBI each from Luke Tunningley and Dillon 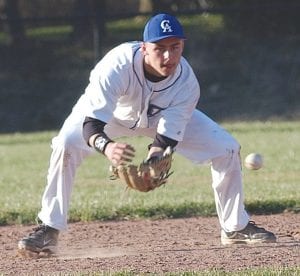 Infielder Justin Hubbard looks the ball into his glove for the Carman-Ainsworth varsity baseball team in non-conference competition against Linden Tuesday.

The second game was called after three innings of play because of darkness with Linden holding a 7-4 lead, shining a light on the role Mother Nature has played in the team’s development so far this year.

“The field was a problem for the Cavs as this was the fourth time all season Carmn-Ainsworth was on a baseball field. Weather and field conditon has forced Carman to practice indoors all season,” Miller said. “I was pleased with our pitching today, which was expected to be weak point for us. 14 Errors on the day was an indication of a lack of practice outside. We put the ball in play most of the day but left nine runners stranded in the first game.”

The Cavaliers, 0-1 overall, 0-0 Big NIne, are at the Montrose Tournament Saturday, Monday the team begins league play at Flushing and on April 21 Carman-Ainsworth makes the journey over to Bridgeport for a pair of non-conference matchups. The squad had been slated to begin 2011 on Mar. 31 at Kearsley, but that game was cancelled because of weather.