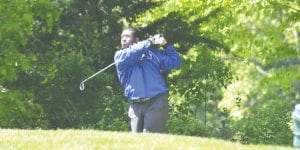 Carman-Ainsworth’s Tyson Fields watches his tee shot fly toward the green at the regional tournament last Thursday at Metamora Golf and Country Club.

METAMORA — The Carman-Ainsworth boys’ golf team competed at the Div. 1 regional golf tournament last Thursday at Metamora Golf and Country Club, but were unable to finish within the top three teams to qualify for the state tournament. None of the Cavaliers finished in the top three individual scores to move on to states either. Grand Blanc took the trophy home with a 324 while Midland followed with a 325 for second and Traverse City West had a 326 for third. Lapeer also carded 326 but lost on the fifth-man tiebreaker. Carman-Ainsworth was unable to submit a total score due to one of its players being unable to finish his round.

Tyson Fields carded an 84 to lead the Cavaliers. Fields was just five strokes off of qualifying in the last individual spot for the state tournament. John Karbowski followed with an 89 and Griffin Rousseau shot a 127 to round out the scores for the Cavaliers. Aaron Floyd was also on the course, but was unable to finish out his round.