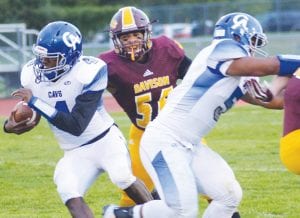 Carman-Ainsworth quarterback Josh Jackson (4) breaks through a hole behind a block by Jalen Lewis in last Friday’s game at Davison.

DAVISON – Carman-Ainsworth jumped out to a three-touchdown lead, then held off Davison in the second half to post a 21-14 victory in a Saginaw Valley League football crossover game last Friday at Cardinal Stadium.

The Cavaliers scored a touchdown in each of the first three quarters to go up 21-0, then survived Davison touchdowns in the third and fourth periods. Caylen Jones’ interception of a tipped pass in the final minute sealed the Cavs’ first win of the season.

Carman-Ainsworth went up 14-0 in the first half on Josh Jackson’s 70-yard touchdown pass to Logan Banister and Jalen Lewis’ 80-yard touchdown run. Lewis scored again in the third quarter for a 21-0 lead.

Davison scored on short touchdown runs by quarterback Brendan McRill in the third quarter and Jordan Cooper in the fourth but fell to 2-1 on the season.

Lewis finished with 130 yards rushing on eight carries as Carman-Ainsworth totaled 172 yards on the ground. Jackson hit 6 of 9 passes for 140 yards as the Cavs rolled up 312 yards in total offense. Banister finished with four receptions for 91 yards and Cahlil Brownlee had a 38-yard catch.

The Blue Brigade marching band provides some pregame entertainment at a Carman-Ainsworth home game in the season opener.