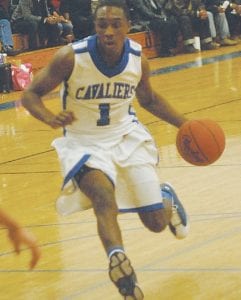 Denzel Watts had 22 points to lead the Cavaliers past Davison.

Considerably shorter than last year’s squad, the Cavaliers can still post the same regular-season record (16-4) if they beat a sub.-500 Brandon team tonight. They’re not a top-10 team like last year’s club, but they still rank high among the honorable mention teams in this week’s Class A poll.

These Cavs also did something last year’s team did not: Win a share of the Big Nine Conference championship.

Carman clinched a tie by beating Davison, 50-31, last Friday at Davison. Denzel Watts scored 22 points and Anton Wilson had 12 as the Cavs finished 5-1 in the league to tie Flint Powers Catholic. Wilson is their biggest player at 6-foot-5.

The Cavs started slowly against Davison with an 8-4 lead in the first quarter. But they exploded with a 19-4 second period to take a 27-8 lead into halftime.

Just like their last meeting at Carman, Davison rallied in the second half, though not as dramatically as in the 69-60 game Jan. 28. The Cardinals used a 15-8 third period to close within 35-23 of the Cavs, but Carman nailed it down with a 15-8 finish in the fourth.

After tonight’s regular-season finale, Carman will go into Class A district tournament play Monday at Saginaw Arthur Hill against Owosso. The district also contains fifth-ranked Saginaw, Flint Northern and Flushing. If the Cavs get past Owosso, they will meet Saginaw at 7 p.m. next Wednesday. In the other bracket, the winner of Monday’s Flushing-Arthur Hill game will play Northern at 5:30 p.m. Wednesday. The championship game is at 6 p.m. March 11.